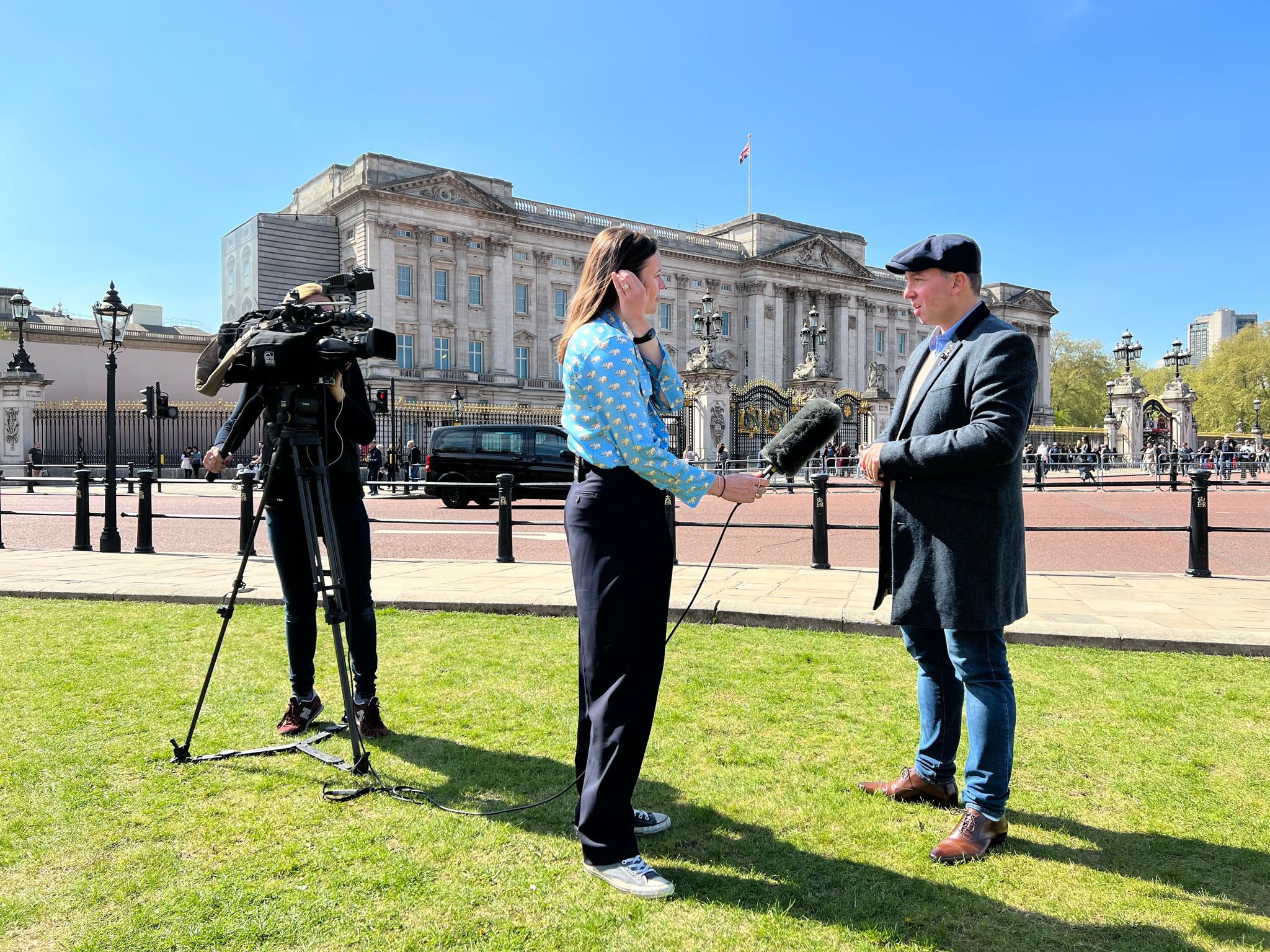 The Platinum Phoenix Thomas Mace – Celebrating The Queen and Rising to Number One on the Charts, Mr. Monarchy Defies Critics

He is at it again and nothing can keep him down, especially during this historic year for Her
Majesty, Queen Elizabeth II of the United Kingdom. Creating a new 2-track anthem to
celebrate The Queen’s 70 years on the throne, Thomas Mace-Archer-Mills, known as Mr.
Monarchy for his vast Royal knowledge and extensive career within the media,
commissioned the titled work, “EIIR: The Platinum Record, A Jubilee Anthem”, through the
British Monarchists Society of which he is founder. Undertaking nearly a year and a half of
creative work on the project, Mace-Archer-Mills has brought together some of the most well-
known people in the British music industry to realise his vision, and to prove he is a force
that cannot be kept down.

Garnering one spot on the music charts is difficult but having two at the same time is a near
impossible feat. Working alongside British based South African composer and Opera singer,
Anton Van Der Mere, private Royal composer to Her Majesty and the Royal family, Dr.
Olga Thomas, as well as Britain’s most well-known soprano, Lesley Garrett CBE, the West
End’s Rodney Earl Clarke, who is currently performing in Les Misérables, and the London
Community Gospel Choir, Mace-Archer-Mills has not only made history, but has quite
literally created it by landing his project in the top two positions on the iTunes UK classical
chart.

“EIIR: The Platinum Record, A Jubilee Anthem” is a double A-side composition which is
formed of a classical piece titled “The Four British Nations” composed by Dr. Olga Thomas,
with lyrics, and Latin arranged by Mace-Archer-Mills. Brought in specially to produce this
track, famed musician and executive producer, Robert Emery, who is well known for his
Crown Copyright projects with Her Majesty’s Massed Bands amongst various other award-
winning credits, assisted Olga Thomas in her composition, which Mace-Archer-Mills
envisioned to be the introduction to a more symbolic and world-themed work titled “(Your
Majesty) We Thank You From Our Hearts”, a musical theatre-esque voyage around Her
Majesty’s Realms and the greater Commonwealth, circumnavigating 70 years of the Queens
work across the globe.

Dr. Thomas says of working with Mace-Archer-Mills in designing and composing “The Four
British Nations”, “It was very interesting, exciting, and a rather special experience from the
beginning. Thomas gave a very clear conception of what he wanted me to undertake in the
composition of the work. At first, I saw this commission as a classical, processional,
instrumental piece in the traditional style of Elgar. I did not think of it as having any vocals,
however Thomas’ idea to bring the Latin words into the work helped to evoke the image of
Her Majesty’s Coronation of 1953 – British State Pomp and Pageantry. Because he was so
clear with his design, and the feeling he wanted listeners to evoke from the piece, it was very
easy for me as a composer to realise his vision. I hope Thomas is happy with the overall
result”.

The second, but equally important song forming the complete Jubilee Anthem, (Your
Majesty) We Thank You From Our Hearts was composed by Anton Van Der Mere, who
also co-produced the track with Etienne Lane and co-wrote the lyrics with Mace-Archer-

Mills. The deeply symbolic song features steel drums of the Caribbean, the Didgeridoo of
Australia, authentic Hindi, Maori, and Swahili chants, among other regional music flavours
that reference the various countries of the British Commonwealth of Nations. Working for
hours on end to strike just the right tone through lyrics, history, and education, Mace-Archer-
Mills and Van Der Mere were able to create some of the most catchy and meaningful lyrics
that the public will hear over the next few months, as the build up to the central Jubilee
weekend builds steam. 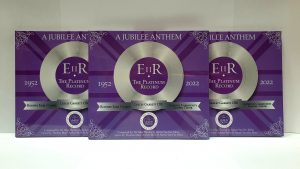 Van Der Mere stated, “Working with Thomas was like working with a brother, as it felt like
we both came from the same place and understood each other perfectly. Many things
happened instinctively and telepathically in the creation of “We Thank You”, as we were
almost perfectly in sync. We have the same work ethos and standard of excellence, and I
gained so much respect for his Royal and historic knowledge, his gift of public speaking and diplomacy. I made an amazing friend in this process”. Van Der Mere further commented on the technicality associated with the authenticity of the work, “As both Thomas and I try to always be as real and authentic in what we produce, we truly wanted to create the most genuine experience in every different world segment of “We Thank You From Our Hearts”.

This is evident in the instrumentation used for the orchestration as well as the correct
meaning of every native chant and sound that was created for the piece”.

In preparation for the release of his Platinum Jubilee Anthem, Mace-Archer-Mills and the
team of creators and artists embarked on several days of live and pre-recorded press and
media interviews, a day-long press junket on the eve of the Queen’s Birthday, and rehearsals
for the live world premiere performance which culminated in a star-studded launch evening
hosted at the luxury five-star, Royal themed, Rubens at The Palace Hotel opposite the Royal
Mews at Buckingham Palace, London.

The British Monarchists Society celebrated the world premiere of “EIIR: The Platinum
Record, A Jubilee Anthem” commissioned in honour of the Queen’s 96th birthday and 70-
year reign, on 20 April, the eve of Her Majesty’s 96th birthday. The Society presented the
world premiere performance of the Anthem for members of the Royal household, Lords and
Members of Parliament, High Commissioners, celebrities, Royal Warrant Holders, and VIPs.
With a welcome speech by Mace-Archer-Mills, as well as other by Dr. Thomas and Van Der
Mere, the live performance followed featuring England’s national treasure Lesley
Garrett CBE and Rodney Earl Clarke, along with themed photo montages spanning the long
life of the Queen.
The launch of this historic project was a grand success with free-flowing bubbles and British
themed canapes, as well as a personal memorial mention for Sir David Amess MP, friend of
Mace-Archer-Mills and Parliamentary Patron of the Society. Wrapping up the formalities,
Mace-Archer-Mills asked everyone to raise a glass to “The Queen”, from which point those
assembled gathered for photographs at the step and repeat boards and continued to sip on
their bubbles until it was announced in the early morning hours of The Queen’s Birthday, 21
April, that both songs on the album debuted at #1 and #2 on the iTunes Classical Music chart
in the UK. The album debuted at #27 on the iTunes UK Top 100 Albums chart.
If the success of “EIIR: The Platinum Record” was designed by Mace-Archer-Mills to
purposely call out his critics since appearing as the most interviewed Royal commentator of
the Duke and Duchess of Sussex’s wedding in 2018, with continuous creation of popular

educational projects such as this musical tribute to Her Majesty which highlights his
comprehensive understanding of British Royal history, then Mace-Archer-Mills is certainly
having the last laugh.

Recently included as a guest lecturer on Princess Cruise Lines’ Sky Princess, Mace-Archer-
Mills formed part of their Enrichment Lecture Series with Royal topics presented in the
Princess Theatre, including “Royal Love Stories” and a special sneak peak of the Platinum
Jubilee Anthem in “What is a Jubilee”. He continues to be a sought-after commentator,
having filmed in NY for a documentary about Diana, Princess of Wales, to be released in
August, and further appearing on BBC Radio for the Memorial Service of the late Duke of
Edinburgh, GB News, Sky News, The Jim Masters Show, and Polish State Television. He has
just appeared on the televisions of his home state of New York on WPIX News 11, reaching
an estimated 8 million viewers on Her Majesty’s birthday to discuss the Jubilee Anthem
project via satellite. Broadway World has also featured Mace-Archer-Mills and his musical
project celebrating The Queen, which has brought him and his works to the attention of
millions more.

Rising like a phoenix from the xenophobic media onslaught he once faced due to being
American born, Mace-Archer-Mills continues his steadfast course to further educate about
and promote the positive attributes associated with Her Majesty and the British Crown.
Mace-Archer-Mills stated, “This may have been my vision, but it is everyone involved that
has made it come to life and get the project to where it is on the music charts. The composers,
the fantastic and talented artists, down to the producers and even publicists, I could not have
asked for better people to work with, to realise my vision. We have created something ever so
special which spans 70 years of a reign and 96 years of a life in just a few moments of song.
This has been a project of love, admiration, and respect, from which I hope Her Majesty will
come to appreciate this tribute we have created not only about, but for her”.

Asking if he saw the success of this musical project as a tool to defy his critics from 2018 and
shut down his naysayers, while further cementing himself as an authority on The Queen and
the British Monarchy, Mace-Archer-Mills offered, “This project stands and exists on its own
merit, regardless of who people think I am and what they feel I should know. It is none of my
business what others who do not like me, think of me. Critics, naysayers, bah, I am one to
pick myself up and move on from whatever negativity and jealousy the world has to throw at
me. I have learned that being associated with such a high-profile institution such as the
British Crown, and the most famous woman in the world, will expose me to those who may
not agree with them, or my defence of such institutions and their history, but I remain positive
and forward thinking. I respect differing opinion, but do not tolerate bullying in any form as I
have unfortunately experienced from certain factions of the media and complete strangers. I
know my subject extremely well, and I remain committed to what is important – educating
about and defending the Crown. Where I was born does not dictate what I should know, nor
does it negate my expertise and knowledge about The British Crown. I do not need to prove
myself to anyone as my career, knowledge, and work all speak for themselves”.
The Platinum Record is now available on all music streaming platforms,
including iTunes and Spotify.

You can join the growing global campaign to thank Her Majesty in this record-breaking year
by helping to take “EIIR: The Platinum Record to number ONE worldwide. YOU CAN
HELP MAKE HISTORY! Download, hashtag &amp; share today!!
Worldwide: