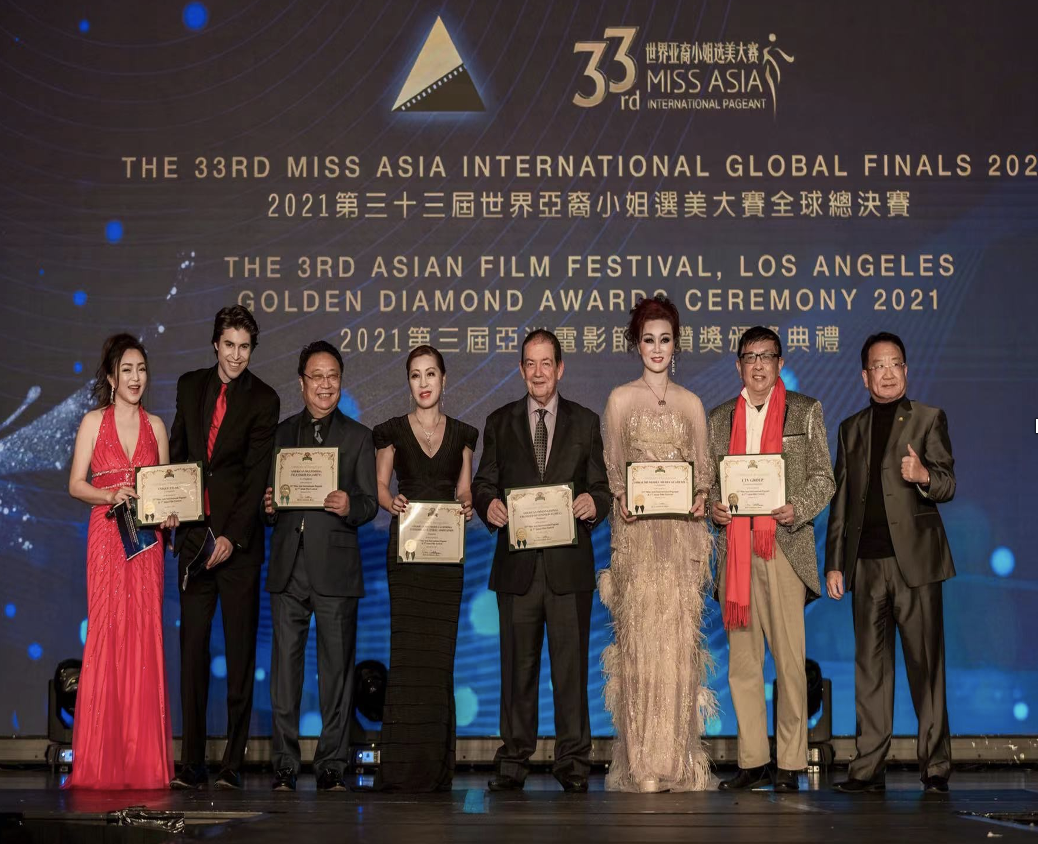 Despite The Fear The Show Must Go On

In the time of the Pandemic most of us at the hands of bureaucrats have experienced mask,
mandates and shut downs to which little have been effective in stopping the virus but certainly
have affected life as we have experienced in the past. Many events, shows and pageants have
been cancelled. Then there are the few, the brave, the proud who as is always in America when
knocked down, we the people not only get back up but we go forward. In this instance the
organizers put together a two-in-one.

On December 19, the 33rd Miss Asian World Pageant Global Finals and the 3rd Asian Film
Festival (AFF) Golden Diamond Award Ceremony authorized by the American International
Chamber of Commerce (AICC), co-hosted by the Southern California Economic, Trade and
Cultural Association and AMTV, and presented by UTV, were co-organized by JMK&amp;M3
School of Modelling and Media, were grandly held at the Palm Springs Hotel in Los Angeles.

Over 500 people from Hollywood film and television, fashion stars, models, and business
celebrities attended the event. Some of the most notables were, Holmes Stoner, President of the
American International Chamber of Commerce and his wife, Oscar-winning director Richard
Anderson, and his wife, Assistant Secretary of the U.S. Department of Education, and guests
such as Shelley Sykes, Diana Lechon, Evgeny Likhachevy, Leith Eaton, Wang Yiju, Mason Han,
and members of the Beijing Olympics attended.  San Gabriel Mayor Liao Qinhe, West Covina
City Councilor Wu Tonghuai, and Mayor of Ceremony Hu Zhang Yanyan attended the
ceremony to congratulate and present congratulatory certificates to the organizers of the event.
The event was hosted by famous Los Angeles hosts Zihan and Bai Long. Qin Jiahao, the
executive chairman of the AFF Asian Film Festival sent a video speech congratulating the event.
The president of the American International Chamber of Commerce and the chairman of the AFF
Asian Film Festival presented awards to the best film winner – Winter in LA – and gave a speech
to thank the more than 700 films and more than 30 who applied for this film session.
Congratulations to the scripts, 146 shortlisted films and 18 award-winning films, actors and
production staff participated. The AFF is looking forward to more films participating in the in
the next AFF and Golden Diamond Awards.  There were six other awards presented at the event;
The best documentary – Song of Little Saigon – and the best documentary short film – Believer-
the best student short film – Magician: Game of Detective – and – Take it Easy – director Suja
Raghuram Mano  The Chinese child actor Aiden Lu, who won the best new director and the
American film – Snails – won the Best Child Actor Award; Oscar-winning director Richard
Anderson and his wife personally presented the Best Rookie Award to the Chinese-American
actress Tyler Li Stoner.

Chairman Huang Dong Ping of AICC, the chief planner and organizer of the 33rd Asian
International Beauty Pageant, and co-organizer and chief director Shen Ping of JMK/M3 Model
Media Academy Dean Mindy Li delivered speeches to welcome the guests arrival. The event
offered guests an audio-visual feast that combines classical, music, fashion and beauty. Josh
Moreland sang and Andy Madadian sang the song – GOOD FIGHT – and also sang Christmas
songs with Ms. Shen Ping!  Zhu Yibing’s cello solo was wonderful, the fashion show was
presented by fashion boy MASAKI MATSUKA and there were many other exciting programs.
There were 14 beautiful ladies that participated in the competition. The first, second, and third
place were won by Miliya Tao, Shana, and Selena Chen. At the same time, Sunny Bai received
Best Dress Award, Alina Su the Best Talent Award, Meichea Pu the Best Photogenic Award, and
Bella Bao The Most Potential Award, Fayer Wang’s the Most Energetic Award, Sally Chow’s the
Best Popularity, and the rest of the contestants won the Excellence Award.

This event has great significance, fully demonstrating the beauty, charm and elegance of Asian
women and in this time of the pandemic the event was a fine example of promoting the spirit of
living and loving life.