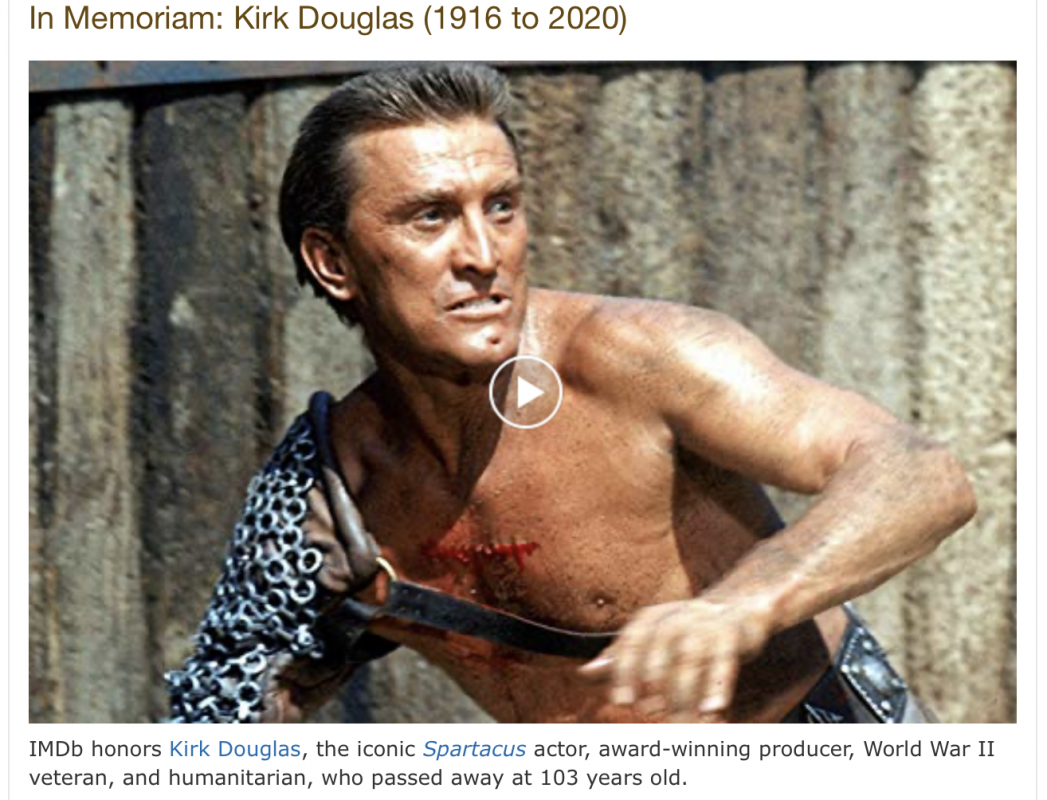 Those words I’m Spartacus many admirers are saying today as legendary actor, director, producer, author and philanthropist Kirk Douglas, one of the iconic Golden Age of Hollywood stars passed away at 103 years of age. We have heard the expression rags to riches. Well Kirk Douglas latterly was. Born in Amsterdam, New York, Douglas immigrant father sold rags to support Douglas, his mother and 5 sisters. Kirk Douglas lived a hard-working life. Stared in New York and soon Hollywood would call.

Douglas had two marriages but was a man with a long-standing marriage, to Anne Douglas from 1954 to 2020, a rarity in Hollywood. Douglas had 4 sons and most notable famed actor Michael Douglas was like father-like son an award winning actor with Two Oscar Awards one for the role of Gordon Gekko in Wall Street and one as a producer for One Flew Over The Cuckoo’s Nest and having two marriages with a long time marriage to the beautiful and talented actress Catherine Zeta-Jones of the musical Chicago and Zorro films.

I grew up watching Kirk Douglas and remember Douglas with that iron-jaw was often referred to by my father and his friends as a man’s-man. Kirk Douglas was always impactful and why he was cast in so many variety of types of film and roles whether in a leading or supporting actor role. Douglas was an Oscar Nominated and Award-winning actor who acted in over 55 movies in his career. Douglas was Nominated for Best Actor in a leading role in Champion in 1950, and again in 1953 in The Bad and The Beautiful with Lana Turner and again in 1957 in Lust for Life. The number of nominations and awards is almost as long as his entire life. Douglas played in such roles as 20,000 Leagues Under The Sea, Gunfight At The O.K. Corral, The Vikings, but is likely best known for his commanding performance in what many call an epic film, Spartacus. While everyone in my family always remembers Spartacus I liked Douglas in the westerns. Douglas was cast with great Oscar Award winning film legends like Barbara Stanwyck and in Westerns along-side legend John Wayne. Often you could see how these stars played off each other and brought the best to us the audience. Known for immersing himself in roles many thought he actually had become Vincent Van Gogh in Lust For Life where he won the Golden Globe for Best Actor. That for me was truly who Kirk Douglas was and how he lived with a lust for life. Douglas was nominated several times for Emmys.

Awarded a star on the Hollywood Walk of Fame in 1960. Numerous foreign film awards. The Presidential Freedom Award in 1981 from President Jimmy Carter. Honored by the American Film Institute or AFI for a Lifetime Achievement Award in 1991. The Writer’s Guild of America awarded the Robert Meltzer Award in 1991. The Kennedy Honors in 1994. Some of Kirk Douglas’ greatest awards were an Honorary Oscar for 50 years for being a creative and moral force in film in the motion picture community in 1996. The Screen Actor Guild Lifetime Achievement Award in 1999. The Producers Milestone Guild Award in 2001.

People who knew him would tell me that once Douglas entered Hollywood he was a great communicator in film, on television, in interviews and as an author living life to its fullest. Also, rare for an iconic actor and a man’s-man often being called brash in today’s world instead of being political Douglas wrote a life book My Stroke of Luck with humility. A good lesson for us all. So for those seniors thinking life stops at retirement age get a grip. From Amsterdam to Beverly Hills , Kirk Douglas was still going on adventures and had a personal trainer at age 101. Douglas never shackled by things was using the latest internet technologies for communication right to just the last years. Prince Mario-Max Schaumburg-Lippe adds: Michael Douglas And Catherine Zeta Jones are two of the kindest people I ever met and my prayers are with their entire beautiful family.

From our newstodayworld.org on Google News team we wish the Douglas family our condolences and prayers and Kirk Douglas an inspiration to all of us as the real I’m Spartacus may you enjoy heavenly peace.