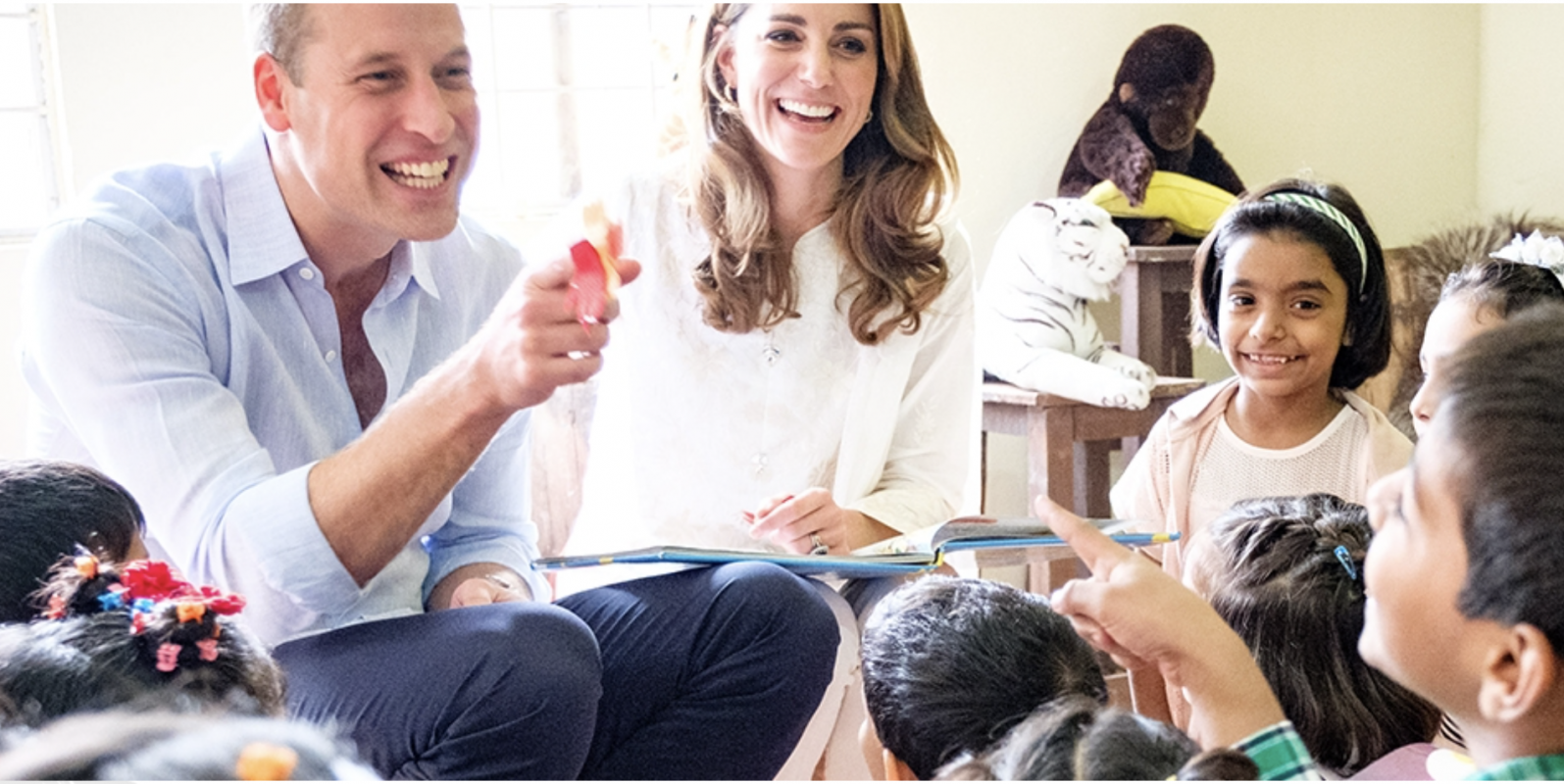 The Duke of Cambridge (Prince William) is the second in line to the throne and the elder son of The Prince of Wales and Diana, Princess of Wales. His Royal Highness is married to The Duchess of Cambridge, Catherine, with whom he has three children, Prince George, Princess Charlotte and Prince Louis. The family’s official residence is Kensington Palace. His Royal Highness undertakes a number of charitable activities and projects and carries out public and official duties in support of The Queen, in the UK and overseas.

His famous quote tells us all about his character:

Let us not tell our children the sad tale of how we watched as the last elephants, rhinos and tigers died out, but the inspiring story of how we turned the tide and preserved them for all humanity.

The Duchess of Cambridge, born Catherine Elizabeth Middleton, married Prince William at Westminster Abbey in April 2011. Their Royal Highnesses have three children, Prince George, Princess Charlotte and Prince Louis.  The family’s official residence is Kensington Palace. As well as undertaking royal duties in support of The Queen, both in the UK and overseas, The Duchess devotes her time to supporting a number of charitable causes and organisations, several of which are centred around providing children with the best possible start in life.

She is a fierce fighter for children and a wonderful mother, who stated:

It is our duty, as parents and as teachers, to give all children the space to build their emotional strength and provide a strong foundation for their future.

Their big  charity activity is The Royal Foundation. The Royal Foundation develops programmes and charitable projects based on the interests of Their Royal Highnesses by working with organizations which are already making a proven impact in their respective fields. The Royal Foundation provides additional investment, mentoring, support and partnerships for these programmes, and lends its own profile and leverage to enhance the effect of their good work.

Historic parts of Kensington Palace are a tourist attraction. Kensington Palace is also home to the Royal Ceremonial Dress Collection, with items of Royal, ceremonial and court dress dating from the 18th century to the present day.

Kensington Palace is now also a centre point for celebrating successes. In July 2015 The Duke of Cambridge, President of the FA, welcomed the England Women’s Football Team to Kensington Palace to congratulate them on their record-breaking performance at the World Cup in Canada that year. In November 2014 The Duchess of Cambridge hosted the Place2Be Wellbeing in Schools awards at Kensington Palace.

In 1689 William III bought the Jacobean mansion Kensington Palace, originally known as Nottingham House from his Secretary of State, the Earl of Nottingham, and commissioned Christopher Wren to extend and improve the house. Until the death of George II in 1760, Kensington Palace was the favourite residence of successive sovereigns.

Queen Victoria was born and brought up in the Palace and news of her accession in 1837 was brought to her there by the Lord Chamberlain and the Archbishop of Canterbury; however Victoria chose to reign from Buckingham Palace. It had been expected that Victoria would reign from either Kensington or St James’s Palace but almost immediately she moved to Buckingham Palace and never again stayed at Kensington Palace.

Queen Mary (grandmother of the present Queen) was born at Kensington Palace in 1867. The Duke of Edinburgh stayed there in his grandmother’s apartment in 1947 between his engagement and his marriage.

Fellow Royal and Hollywood TV Anchor His Highness Prince Mario-Max Schaumburg-Lippe (His father Prince Waldemar is in line to the British Throne) adds: The power couple Prince William and Duchess Kate are such incredible role models. Every action comes from their heart, every step they take ist upmost planted with sweetness and every smile is based on true love for the people. We adore them in Royalty. They are simply the very best !