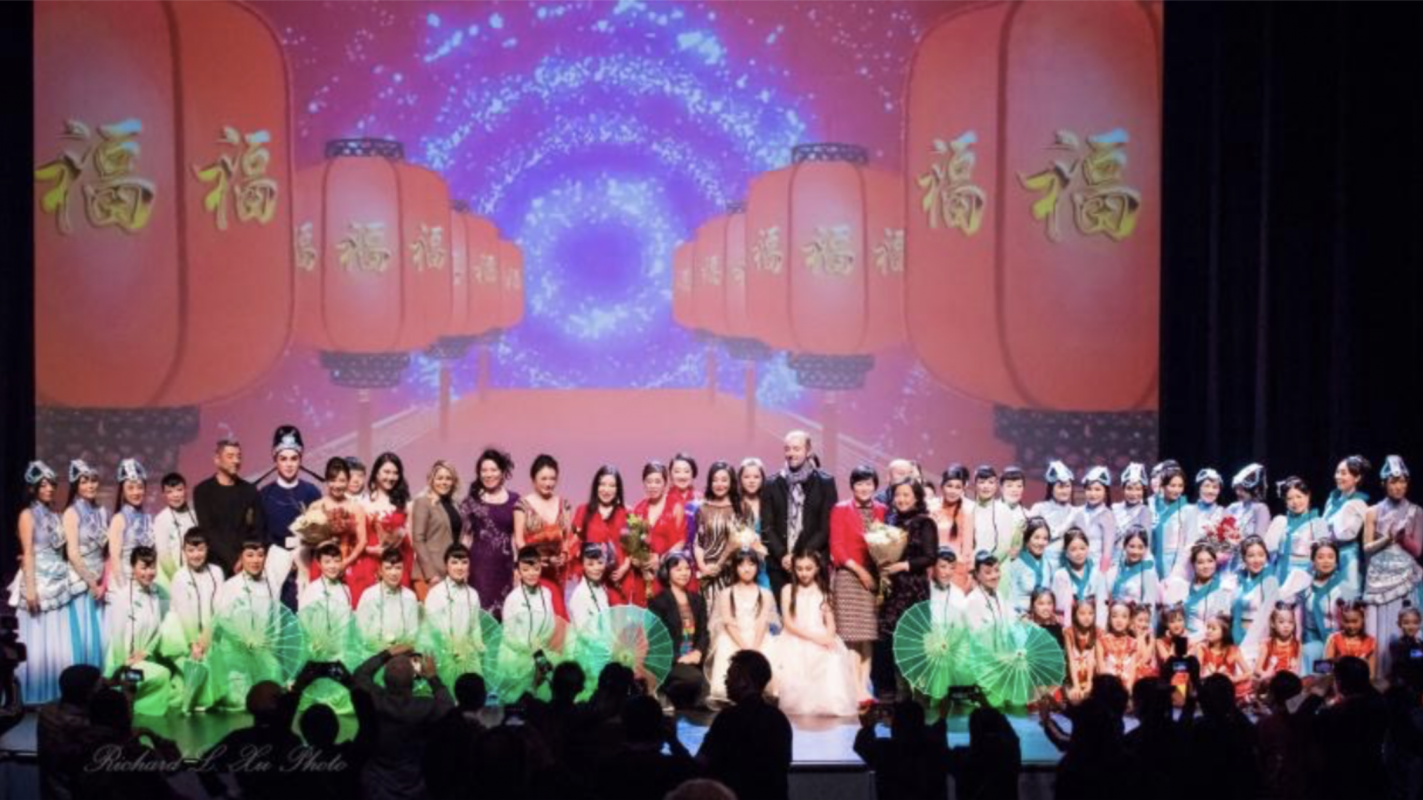 Saturday, January 11, the Chinese America Spring Festival Gala at the Barclay Theater on the campus of University of California Irvine was celebrating to a full house of over 1,500 guests. The Barclay theater lends itself to the community of Irvine which has a large Chinese, Korean and Asian population and has been the prime location the Chinese American Spring Festival Gala for 12 successful seasons.

The Event started with a Press Conference where in VIP Guests and Press posed for pictures and gave interviews with the anticipation of the show. Dong Ping Huang and AIC President Zi Han several of the hosts were wearing Stunning Gowns from the Red Collection from World Famous International Designer Kiki Wang “The Empress of Fashion” who had several of her gowns at the Golden Globes. (She just received the Empress of Fashion Award by Prince Mario-Max Schaumburg-Lippe in Rockefeller Center New York on the 16th of January 2020).

It provided a Red Carpet style fashion statement with a Festive Oscar Style feel to begin the Gala. Supervisor was privileged to pose with two amazing super models Julie Ping Shen and her partner who were sponsors of the event. Dong Ping Huang the President of the Chinese American Cultural and Economic Association of Southern California was the Organizer of the Gala and put together a strong Production Team with Jiesheng Wang as Director, Han Zi, Sudan Wenxi Lin as the Chairmen. The event was co-organized by Wutang of the Shaolin Temple of Orange County and American Chinese Development Mutual Aid Society.

Soon there was the curtain call and the Gala began with Dong Ping Huang giving a warm welcome to bring in the Chinese New Year “Xin nian kuai le.

There were multiple Elected Officials, VIPs and Dignitaries present for the Chinese American Spring Festival Gala.

Yomgmei Zhou delivered a speech on behalf of Consul General Zhang Ping and thanked the organizing committee, crew and volunteers for their hard work and dedication and wished the performance a complete success. Further Yomgmei wished Chinese and overseas Chinese friends in the Year of The Rat a happy, good luck and prosperous year.

All the other dignitaries followed one-by-one to wish everyone a happy Chinese New Year. Anyone who knows Dong Ping knows this Gala was again a signature event of her unique ability to combine both professional and amateur talent and of a warm and artistic performances. The Chinese Spring Festival Gala this year included folk songs Peking (Beijing) opera, ballet, Latin dance, folk dance, a Special Performance by choreographer Huangcheng “Peter” Wang who is famous with millions of followers in China with Chinese square dance, “Chinese year the Boom.” piano solo, women’s orchestra, performances by famous Chinese singers and contest winning actors, and a group of traditional dancers.

Hollywood Media Manager His Highness Dr. Prince Mario Max Schaumburg–Lippe and Education Scientist with her Accelerated Super Learning and Russian Entertainment Specialist Alla Matusov, who just successfully educated and graduated a 11 year old who was accepted at UCLA who is a consultant to Youth Dancing with the Stars. Dr. Mark A. Rafter (aka The Modern Day Marco Polo) was sitting with Prince Mario-Max, Alla and Kiki Wang interpreting were touched by the cultural richness of the show. Marco shared with His Highness and Educational Partner this is often the time when overseas Chinese long for that “Hometown Flavor” that Chinese Spring Festival brings. The show embraced not only the theme but provided an audio-visual pleasure, and a true cultural exchange of diverse performers and audience young and old alike.

It was truly a wonderful kick-off for Chinese New Year and ended with VIPs gathering on the stage with congratulations, flowers and pictures, pictures and more pictures.