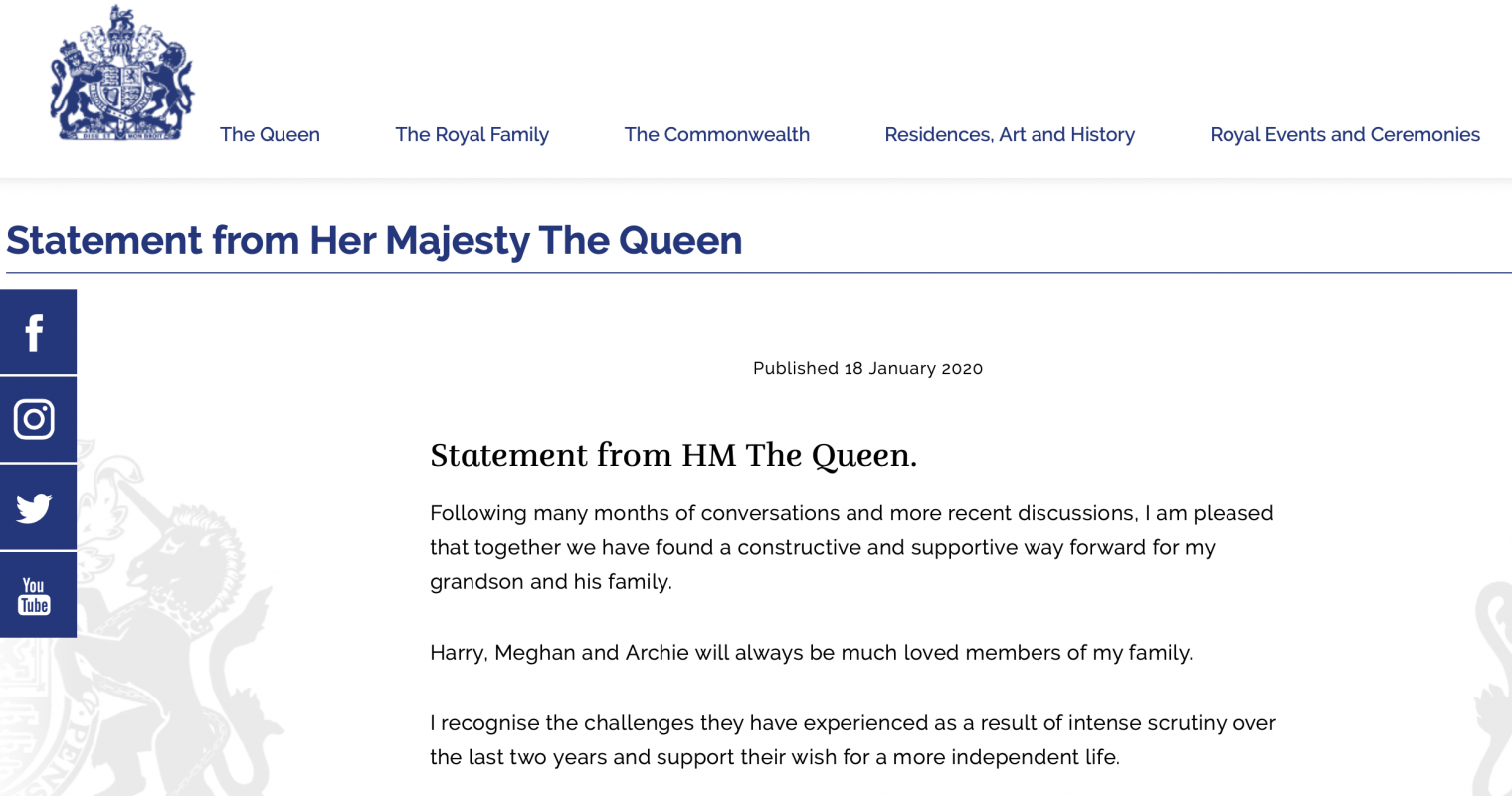 The Duke And Duchess of Sussex Leave The Royal Family

The following important statement from The Office of The Founder Thomas Mace-Archer-Mills British Monarchists Society shows the most significant news of the British Royal Family in 2020 their Patron His Highness Prince Mario-Max Schaumburg-Lippe adds.

With the statement released from Her Majesty, and subsequently Buckingham Palace this afternoon, many media outlets have begun issuing reports stating the the Duke and Duchess have lost their titles and will now be repaying public coffers for the cost of refurbishment to their Windsor Great Park Frogmore Cottage. The media in its tabloid and gossip glory, has failed to mention that the refurbishment of Frogmore Cottage was not paid for by the tax generated revenue of the public, but by Crown Estate profits which go to form the Sovereign Support Grant.

Royal Finances are quite complicated, and in wanting the public to be as educated as possible, it is important to the British Monarchists Society that the public understand exactly to whom the Duke and Duchess intend to reimburse for the home that they will continue to use when they are within the United Kingdom.

Frogmore Cottage is owned by the Crown Estate and therefore the Queen is the proprietor. She can and has gifted use of the property to her grandson and his family as well as allocated funds from the Crown Estate to refurbish the home to bring it up to a habitable standard. Frogmore Cottage was scheduled by Crown Estate management to be refurbished regardless whether or not there were going to be Royal inhabitants living within the structure. Harry and Meghan spent hundreds of thousands of pounds from their private funds to increase the standard of fixtures, supply their own furnishings and interior decoration, in addition to other special luxuries they desired. The tax payer did not see any of their hard earned money pay for the refurbishment to the home of the Duke and Duchess and therefore, they will be reimbursing The Crown for the money spent on renovating the home in which they now occupy on Crown land.

As for the issue of the Duke and Duchess losing their titles, the Palace has stated that they will not use their HRH titles as they no longer will be formally representing the Queen, however this does not mean that they will not retain the titles. They will still be referred to as The Duke and Duchess of Sussex, however “Their Royal Highnesses” will no longer be used or acknowledged formally. As the couple have decided to reduce their role from a senior position to a junior position, the use of the phrase: “They will no longer receive public funds for royal duties.” means that they, in the capacity of carrying out engagements on behalf of the government when asked, or visiting councils on behalf of the Queen, to which these visits are met by the taxpayer, will not longer occur. Any taxpayer subsidy in relation to the aforementioned will no longer be allocated to the couple.

The Duke and Duchess of Sussex have chosen to live as normal and as private of a life as they think they will be allowed to do, with the blessing of Her Majesty. We remain within the belief and under the impression that The Duke and Duchess could and would have been a great added value to the Royal family and indeed the monarchy when the time comes for the Prince of Wales to ascend to the throne. The addition of Meghan to the Royal family was certainly celebrated and welcomed, an addition which is and will remain a positive impact on an otherwise neutral and unwavering institution. It is out of respect and understanding that we offer our support for the Duke and Duchess, and wish them every happiness as they leave behind a nation that has loved and supported them as they embark on their journey as private individuals.