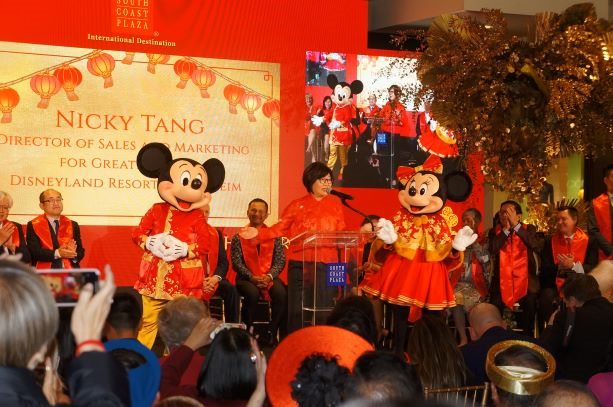 Did anyone tell them Mickey and Minnie are mice. Maybe they needed Disney to send Remy from Ratatouille. The Rat is the first animal in the 12 year Chinese Zodiac. Legend has it the Jade Emperor had a race and the Rat with the virtue of vitality won and the Ox came in second. It did not matter of mice and men cause at South Coast Plaza or SCP as many of us called it, all that glitters is red and gold and it was the Year of the Rat which kicked off with a dazzling extravaganza display of traditional Chinese red and gold in the centerpiece Jewel Court of the world famous South Coast Plaza in Costa Mesa, California.

The 10th annual Lunar New Year Celebration at SCP attracts thousands with an amazing variety of people of every culture from shoppers young and old to world class celebrities and numerous dignitaries. Newstodayworld.org on Google News was there and upon entering one could see that SCP had a Rat problem, Ha ha, with 20 giant rats, lanterns, flowers and chandeliers exciting live entertainment, cultural music and performances by Southern Wind Lion Dance and Thien An Drummers. There were exotic cars and remarkable art exhibitions adorned the event. There were giant rat ice carvings and sensational Chinese cuisine from some of the great Chinese restaurants in SCP. The food and fashions with lovely Chinese women in traditional qipaos and men in fine suits dominated the event.

As Asia News Editorial Director Dr. Mark A. Rafter knows the South Coast Plaza Chinese New Year event provides an opportunity for networking and presents opportunities for becoming informed of news worthy stories about the Asian Community. So many events are happening and newstodayworld.org is at most all of them. Many news stories to come as we keep our ear to the ground and inform and provide many choices for our readers.

Mayor Katrina Foley who serves as council member and on the Costa Mesa Travel Board and the liaison to the Newport Mesa Arts and Culture Commissions was there to proclaim the launch of The Year of the Rat and a series of SCP events that will follow into February.

Haiyan Liu Commercial Counselor from Consulate General of the Peoples Republic of China in Los Angeles gave an enthusiastic greeting and congratulations to Brian Chuan International Marketing Director of South Coast Plaza and to the Segestrom Family for their consistent support of Chinese Peoples. Mr. Liu was very positive and upbeat about the new opportunities with the new China-US Trade deal. Its exciting to hear such positive acclaim that China is open for business.

Members of Korean, Vietnamese delegations and Neil Estrada past president of the Filipino – American Chamber of Commerce of Orange County, California were there to celebrate.

One learns quickly that where ever there are government officials there are always consultants and lobbyist such as Government and Community Affairs Specialist Alexander C. Kim and his lovely assistant.

Lots of community organizations like Li Huang Program Manager for Asia Society of Southern California and our friend Dong Ping of the Asian Pacific Commerce, Trade and Culture Association.

Lots of media was present drawing top media leaders like William Yan of Zhong Tian Channel – PTV Network USA, Inc. and Patrick Cheng General Manager of Skylink where our friend and emcee from the China Southern Airlines appreciation celebration event at the QUE has her TV Show.

Just before exiting the event I had the pleasure to meet Jiaoying Summers, Actor and Comedian and her husband there pushing a stroller with their young child. It shows that is what South Coast Plaza is all about, great events, lots of great stores and brands and young families exchanging culture and pursuing the pursuit of happiness.