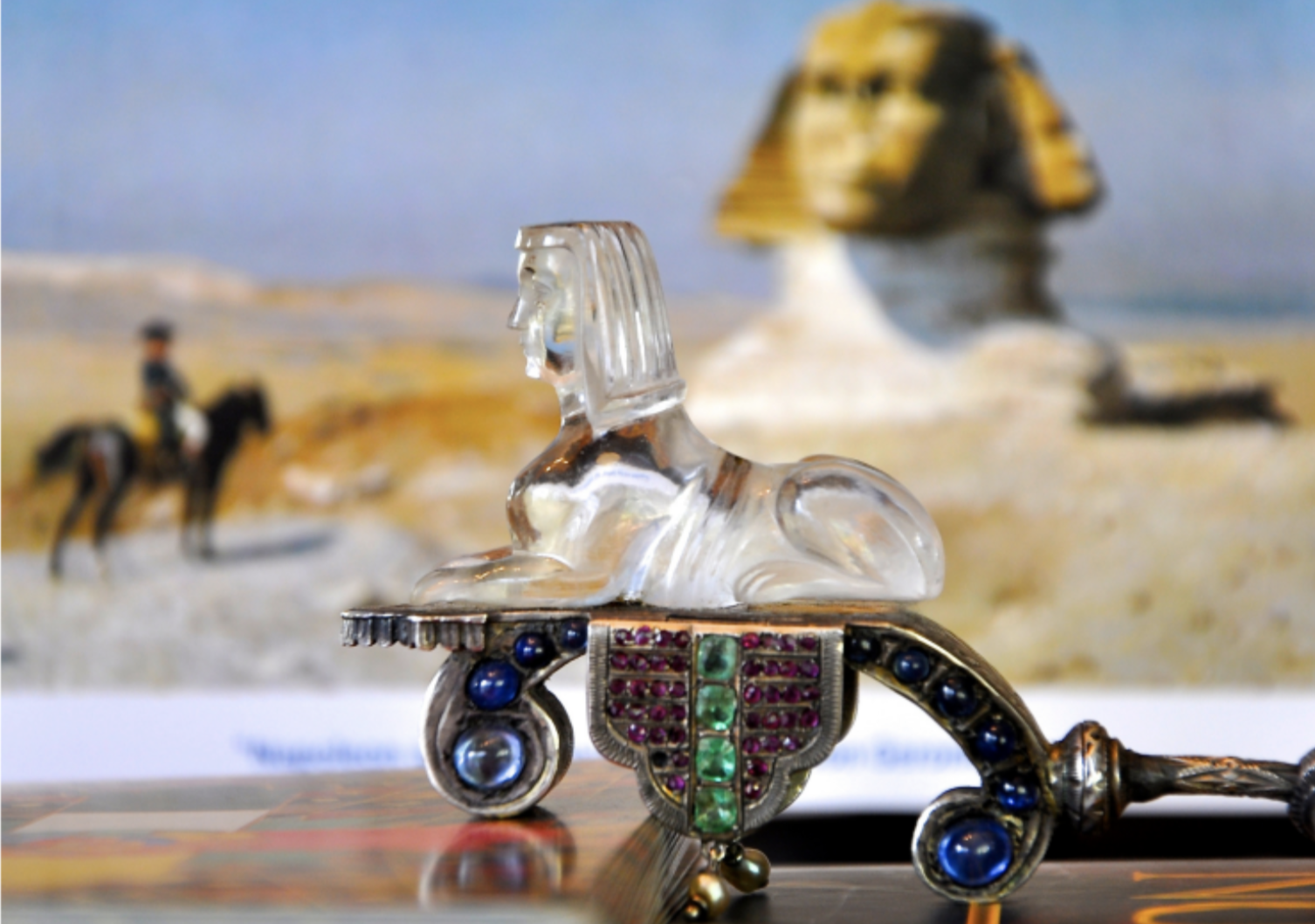 Traded for a set of golf clubs, rare antiquity fetches a $75 million offer – owner turns it down!

How is it possible to calculate the odds that a priceless antiquity, buried almost 150 years in The Netherlands, would find its way into the hands of an antique golf collector in Omaha, Nebraska? And after years of unearthing its archival legacy and identifying the relic as the Talisman of Napoleon Bonaparte, he turns down an offer of $75 million!

The year was 1938 in Holland…. a young landscaper was digging a trench and unearthed a bejeweled object buried 15 feet underground. In 1946, he brought his find to America when relocating to Pennsylvania. His son inherited the mysterious artifact in 1992, and believing that the piece had no value beyond its visible gem stones (rubies, emeralds, sapphires and pearls), put it up for sale on eBay.

The Best Golf Trade Ever? While shopping online for vintage golf clubs, Mensa genius Randy Jensen, also considered one of the world’s foremost experts on antique golf clubs and eight-time National Hickory Champion (winner of more than 70 hickory shaft golf tournaments worldwide), happened across the amulet listed on eBay for $1,500, unsold. Jensen’s curiosity got the best of him, and he offered a trade, exchanging a new set of PING golf clubs (long desired by the owner of the piece).

Why the high valuation?
When examining his “find”, Jensen quickly recognized a Rosicrucian code embedded within the gems, symmetry and other design elements, identifying his treasure as “Napoleon’s Talisman” and spending years of meticulous investigation to decode and explain its full historical significance and priceless value. There is resounding proof of the authentication, as Jensen states, “My 120 page research document was compiled after 6 years of intensive research from Omaha traveling throughout the world, sourcing detail and nuance of this discovery, counseled by Napoleonic experts, especially as related to the French leader’s expedition into Egypt. Not only was Napoleon’s fascination with Egyptology all consuming, but with the 1799 discovery of the Rosetta Stone by his officer, the subsequent deciphering of hieroglyphics and language connecting epochs set the world afire.

Such is the analogy made when I realized the embedded intricate Rosicrucian code within the Talisman! The crystal Sphinx presides atop an inverted Egyptian boat of the Goddess Isis, encrusted with Sapphires. Napoleon patterned the Sphinx’ visage as a harmony of his beloved Josephine’s face combined with the famous Leonardo da Vinci painting The Mona Lisa, which hung in his bedroom for years. The Sphinx also rests on a moveable “magic carpet” of rubies and emeralds with significance in their numerology and placement, all elucidated in my decoding and provenance libretto, with countless other documented substantive analyses.

I also show striking comparisons to the amazingly similar ‘Rosicrucian Medal’, owned and designed by Napoleon, inscribed with his name and gifted to one of his cohorts. That medallion shared the identical gem precision cuts and codes used by Napoleon in his design of his now famous Talisman.”

The Talisman is one of only a few fully intact pieces of Napoleonic jewelry in existence. It is by far, the only one with such pristine intricate and complex design containing all of its original 114 precious stones.

An esteemed Creighton University Professor of Mathematics certifies the credibility of the Talisman with indisputable evidence. According to extensive legal investigation, his probability analysis proves its authenticity “beyond a shadow of a doubt.”

The most famous member of the “Talisman Team”, entertainment legend Pat Boone, had conversations with the CEO’s of both Christie!s and Sotheby’s who recounted, “we cannot disprove Randy Jensen’s research.”

Why reject a $75 million offer for the Talisman? Jensen is clear in his vision: “There has never appeared an artifact in the annals of mankind that resembles this treasure, conceived and uniquely designed as the personal good luck amulet by its owner, the most Famous Emperor in the History of the World—Napoleon Bonaparte!

It is our passionate desire for Napoleon!s Talisman to find its way to a renowned museum or other significant archival venue, to be viewed and cherished by a global audience, who can savor this treasure and appreciate its incredible journey.”

Although there can be no comparison to this unique Talisman, it is widely expected to command over $150 million, still well below its perceived value.

In contrast, consider the Da Vinci painting Salvator Mundi, sold in 2017 for $450 million. According to the documentary Savior for Sale, released last year, renowned Oxford Art Historian Mathew Landaus was quoted as saying, “There is not absolute proof of anything about the painting.” In fact, this Leonardo da Vinci was a total repainting and restoration over the original, yet still sold for a record price.

Over the last 25 years, rare antiques and art, as an investment, have far outperformed the S&P 500, Emerging Market Equities, Gold and US Corporate Bonds.

Are there any special plans allocated for proceeds from the sale? Jensen is dedicated to humanitarian endeavors, sharing from the sale of the Talisman: “Significant funding will support charities that uplift, change and save lives, including Mercy Corps, active over 50 years for global causes and currently supporting the Ukraine effort, and Jack Nicklaus’ Children Health Care Foundation.

On a personal note, his cousin, PGA Golf Hall of Famer, Dr. Gary Wiren, and him are planning to launch a golf museum, featuring his world-class golf collection in their hometown area of Omaha. Like ‘Field of Dreams’, they envision this museum as a mecca for lovers of the sport, ideally situated on a golf course, either existing or a purpose-built, surrounding an enclave of memories on the links!”

For overview video, background on the treasure, the decoding story and link to the complete provenance documentation, as well as information regarding how to place a bid to acquire Napoleon Bonaparte’s now famous Talisman, there is a website http://www.napoleonstalisman.com  info@napoleonstalisman.com