Famed Royal Commentator and Expert Continues to Defy Critics with new Royal Anthem ft. Top UK Artists Honoured by Queen Royal Expert, historian, and commentator, Thomas Mace-Archer Mills, has proven once again that he is a staying power in the Royal world with his new creation, “EIIR: The Platinum Record, A Jubilee Anthem”. Saturating the UK media market with mentions in the Daily Mail, the Express, The Sun, The Belfast Telegraph, and dozens of other top platforms, journalists and editors took to their columns to hail Mace-Archer-Mill’s new creation, designed to honor Her Majesty during this historic and celebratory year.

Building back bigger and better than ever after the discriminatory and competitor fabricated controversy surrounding his birth, shortly after the wedding of the Duke and Duchess of Sussex, where he was the most interviewed expert of the day, Mace-Archer-Mills has been able to silence his bullies and critics with a new musical masterpiece that will be released on the 96 th birthday of The Queen on 21 April, on all major digital outlets and on a limited edition number of pressed CDs and Vinyl. 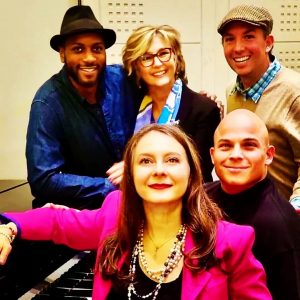 UK press and media outlets were quick to cover Sunday 6 th February which marked the 70th Anniversary of Queen Elizabeth II’s coronation, the longest reign in British constitutional history which saw Buckingham Palace issue a new photograph to mark the occasion and a letter from The Queen re-dedicating her commitment to her people around the world. Despite the fanfare surrounding a new photograph and a Royally penned letter, Mace-Archer-Mills stole headlines by announcing the organisation which he founded, The British Monarchists Society, has commissioned a new album, EIIR: The Platinum Record on BMS Records. As the brainchild and contributor to the project, Mace-Archer-Mills explains: “The album consists of two individual tracks, but together form one Jubilee Anthem which has been composed by my friends and colleagues, private Royal Composer, Dr. Olga, Thomas and Crossover Classical Tenor, composer, and producer, Anton Van Der Mere.” 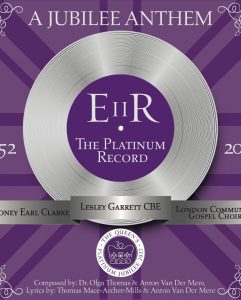 Spearheaded the musical project by pulling together a highly esteemed group of artists to create the album, Mace-Archer-Mills says: “We at the British Monarch Society wanted to honor Her Majesty’s unprecedented 70-year reign. We wanted to create something extraordinary that was not only a musical journey through the Queen’s life, but also an epic circumnavigation around the Commonwealth, discovering the musical representations of Her Majesty’s Realms.”

Thus, Mace-Archer-Mills tapped some of the most highly recognized artists in Opera and Symphonic music in the UK for this project. Along with recruiting Dr. Thomas and Anton Van Der Mere as composers, Mills brought in the most recognised and famed British soprano who has been recognised by Her Majesty, Lesley Garrett CBE, and the West End’s iconic baritone voice, Rodney Earl Clarke, along with The London Community Gospel Choir that features on both tracks. The first track on the Jubilee Album, entitled “The Four British Nations,” composed by Dr. Olga Thomas and produced by Robert Emery, has a British State pomp theme, inspired by the world- famous English composer, Sir Edward Elgar. With chants and shouts of “Vivat”, “Regina”, and

“Elizabetha” arranged by Thomas Mace-Archer-Mills, the track re-creates images of Her Majesty’s Coronation of June 1953.

“This introduction to the world showcase of music needed to be the starting point of the project, as the Coronation of Her Majesty was so moving – an historic event which was staged in a 1,000 year old environment: that we wanted the imagery of this poignant start to The Queen’s reign to be re-imagined by the people of today who weren’t there, but may know about the musical symbolism which we have tried to re-create…” Mace-Archer-Mills added.

The second track, entitled “(Your Majesty) We Thank You From Our Hearts,” composed by Van Der Mere, who also produced the track with Etienne Lane, has a more world music sound. The song features steel drums of the Caribbean, the Didgeridoo of Australia, Hindi, Maori, and Swahili chants among other regional music flavors that reference the various countries of the British Commonwealth. Mace-Archer-Mills commented: “What I had in mind to truly represent Her Majesty, was to highlight her greatest achievement, The Commonwealth. She may reside in Britain, but she is of each of her Realm nations through constitutional law, tradition, and recognition. To properly celebrate the woman she is, and what she means to so many around the world, a true tapestry of sound featuring the iconic instruments of her Realms and territories around the globe needed to be created.”

London’s Metro newspaper picked up on this theme with the headline, “Queen Called Mother of This Nation in New Jubilee Anthem with Didgeridoo”, as the lyrics Mace-Archer-Mills penned referred to her as such. The iconic chanting within the track adds an even more identifying feel for the nations and regions of which Her Majesty reigns over, a complete flavour of indigenous delights to please the pallet. Understanding the place of The Queen in a modern multi-cultural world, Mace-Archer-Mills continued:

“Her Majesty is a great asset not just to the United Kingdom, but to her peoples around the world. She is the mother of the Commonwealth and therefore mother to all of us within it. She is a uniting factor in our bonds to distant peoples and lands, a hand of apolitical peace and reason centered around a common cause, which is the protection of her peoples rights no matter their race, religion, sex, etc., she is truly the pride and joy of many nations.”

His Highness Dr. Prince Mario-Max Schaumburg-Lippe, whose father H.H. Prince Waldemar Schaumburg-Lippe was born into the Royal British Line of Succession to the Throne too adds: “What a wonderful gift for beloved Monarch Queen Elizabeth II”.

This Spring, the world will celebrate the 70-year reign of Queen Elizabeth II at Buckingham Palace on 4 June with a star-studded concert in front of Buckingham Palace. It is the hope of Mace Archer-Mills that the BBC, who is producing the event, will include the music of EIIR: The Platinum Record, which will be released on BMS Records on April 21, 2022. Look out for the album on all major digital platforms as well as limited edition CDs and Records. To learn more about this celebratory Anthem, hear a snippet of what is to come, and discover the behind-the-scenes aspects in the creation of this historic celebration, visit www.thejubileeanthem2022.com