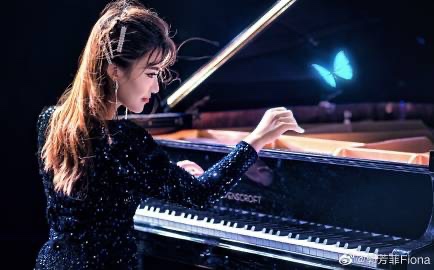 Article written by our Asian Editorial Director Dr. Mark A. Rafter for NewsTodayWorld.org on Google News

2020 Star Fiona. Fangfei Guo (“Fiona”), an international pianist whose star is on the rise was born in a musical family and started learning music and piano from her father since 4 years old. Fiona’s father Guo chengzhi was a famous composer of the central orchestra, and her mother fang ying was a gold medal music producer in China. Fiona showed extraordinary talent, and won the Gold Prize of National Hailun Cup Youth Piano Competition in 2005. As a teenager, she began to try cross-border art creation. In 2009, she performed a song written by herself, “Love love love” in the China Online Music Festival, and won the best stage image award. In 2012, she published and released her first personal piano album “Fangfei.” In 2013, Fiona travelled to Europe and America, and served as a music director at JUSMEDIA. In 2014, she was invited to be photographed for posters for the “WABC Accessible Art” project and recorded the theme song. In September that year, she was invited to the Cool Glass release conference, and participated in recording the theme song.

During her growth, she kept her original feelings about music, which also brought her rich imagination and expressive power. Colin Stone, a world-renowned piano master, commented that Fiona’s music had “extremely talented expressive power.“

On 27th June 2015, Fiona was the first Chinese woman to perform in the musical capital, where she performed the fifth concerto of Mozart in Vienna’s Golden Hall, dressed in a Chinese red long dress. Later in the year Fiona won first prize in the American Lansum International Piano Competition. In May 2017, Fiona performed a cross-border concert at the Royal Northern College of Music. The concert was packed and Fiona received broad acclaim with BBC Radio and Television in the UK.

Fiona published an original piano album in January of 2016 called “Travel”, including “Your Smile”, “Rainbow”, “Rest in Peace” and other pieces and in August she was photographed for the BMW X1 advertisement and in September 2016.” In February 2017, she created the ending song for the movie “Through the Eye”.

Ambassador. In June 2017, she became the Goodwill Ambassador of Miss Global Tourism.

In October 2017, she performed piano choreography “Lotus in the Water” in Serbia and won Best Oriental Original Music Contribution Award. In 2018, she produced a personal musical score “Shimmer”, and released a new album “Peaceful Home.” 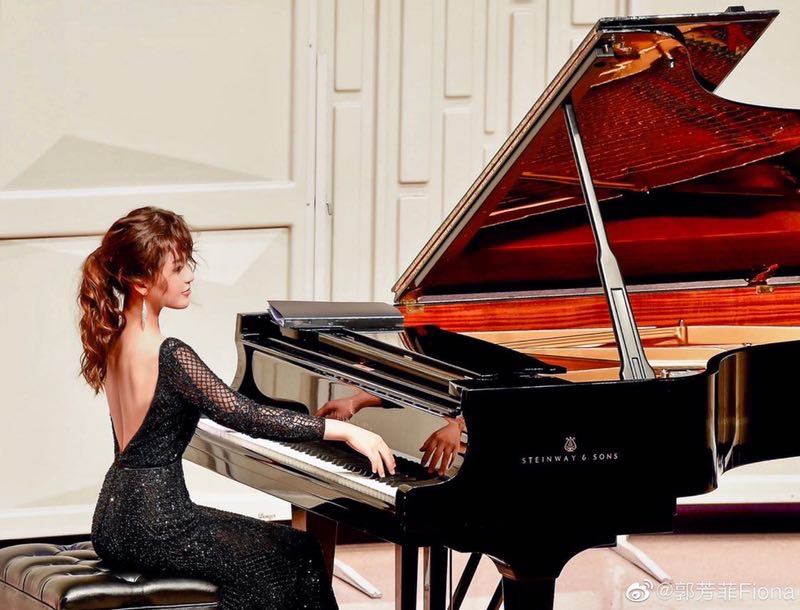 On November 24, 2019 Fiona went to sha tin town hall inHong Kong The concert was to display beautiful and moving music with Fiona’s own adaptation of “chasing the moon with colorful clouds,“ along with Hong Kong folk musicians performing this enduring classic music. The mainland and Hong Kong share the same cultural heritageand Fiona’s music depicts the common pursuit of peace, stability and a better life of all people. The performance was broadcast on Hong Kong’s TVB jade channel during the new “golden music culture square” program, arousing the audience’s yearning for poetic life. Fiona also brought her original piano score for Hong Kong audience “butterfly,“ for “sea dream” a large-scale multimedia magic show “chuang tzu’s dream.” Each part had a special meaning. Part one: the encounter between classical and modern; Part two: the fusion of originality and dream; Part three: the classics. Fiona wore an elegant and stunning black, white and red “Hello Mirror” gown at the concert. In the first part, Fiona played Chopin waltz, Vessenia, The Bumblebees, the girl’s prayer, the four seasons – spring, the path of the wind, one step away, Mozart G major piano trio in the third movement, she was joined with a violin, cello ensemble and at the end of the concert to loud applause from the audience. 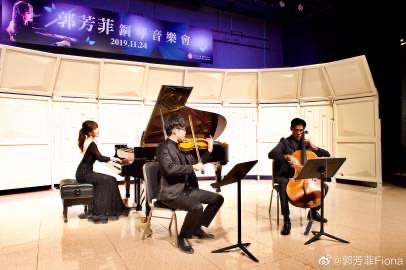 Fiona’s music also radiates a soft power of increasingly bright light in the field of healing. Dr. Rafter has used her music in hospitals and with patients, veterans and homeless and watched many receive a change in mood and motivation.

TV Star. Following her concert and TV in Hong Kong, many famous artists have sent their blessings and flower baskets. In the end, we will hear much more from this wonderful talented young woman. Fiona thanks music fans around the world who have and will in the future support her…