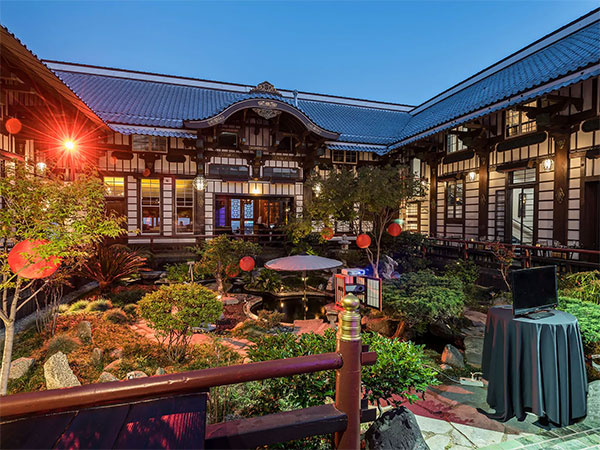 The event was a joint initiative and the launch of “Promotion of World Peace through US-China Television and Film Dialog.” The dinner event took place at the famous Yamashiro Restaurant in Hollywood Hills. At the event, Kathy Q. Hao, Esq. of TCW Global Legal Group and her husband, Dr. David Wood  served as hosts and organizer. Kathy initiated mutual discussion and dialog that was lively and stimulated informative interaction for both China and US. Kathy gave the guests a surprise introduction to Elie Samaha the patron  of Yamashiro and The TCL Chinese Theater who is also a successful film producer of several  hits in his own right. and owner of many famous properties in Los Angeles. It is rare to have an owner of this level to come and spend precious time with any group. But he did and went beyond the graciousness of a restaurateur to be so personable, engaging and sharing his own production successes.

The name Yamashiro translates as “Mountain Palace” in Japanese. In 1911, the Bernheimer brothers began construction of the hilltop mansion to house their priceless collection of Asian treasures. Hundreds of craftsmen were brought from the Orient to recreate the replica of a palace located in the “Yamashiro” province mountains near Kyoto, Japan. Yamashiro sits 250 feet above Hollywood Boulevard and was completed in 1914. It has not only a world class restaurant but private hotel rooms in Japanese Pagoda Architecture. The ancient tea pagoda is rumored to be the oldest original structure of LA, as it was imported as an artifact from China back in the days.

The food was fabulous, “A View from Above” Los Angeles from Yamashiro was breath-taking and the relaxed casual professionalism established by the Leader Kathy Q. Hao was simple the beginning of a wonderful set of new friendships that open the door to a future of World Peace and Harmony through mutual win-win cooperation. “The Buddha at Yamashiro is known to be a lucky charm when you leave a donation”, royal historian and Hollywood reporter His Highness Prince Mario-Max Schaumburg-Lippe added.