Ariana Savalas. The American singer, songwriter, and burlesque performer is the daughter of Academy Award-nominated film and TV actor Telly Savalas (Kojak). Savalas is a resident headlining performer and emcee for Postmodern Jukebox and just finished her residency in Las Vegas before heading to Hollywood for two special VIP performances. She was one of the original members of the successful group alongside Haley Reinhart, Casey Abrams, Robyn Adele Anderson, and Morgan James. She tours with the band and has appeared in a number of the group’s YouTube videos. She is often referred to as The Pussycat and she is known for her risqué on-stage music and comedy. She has even been called the modern day Mae West and the Dita Von Teese of music, fusing her original songs with elements of traditional vaudeville, grand jazz and burlesque. She was described by Las Vegas Magazine as “the musical burlesque queen” and “the mistress of the modern Moulin Rouge”. Hollywoods leading event hosts Al Harris and Raquel Sanchez from KTM inc. express their love: “There ‘s no one out there more talented and cool, the only big problem is that Ariana is constantly booked so its hard to get a hold of her as a headlining event performer!”.

Sophisticated. Her first jazz album, “Sophisticated Lady”, is a combination of Savalas’ original compositions as well as two standards from the Great American Songbook, including the song Sophisticated Lady by Duke Ellington, Mitchell Parish, and Irving Mills which she named the record after. Savalas was widely known in the cabaret world headlining in venues such as the New York Friars’ Club and Michael Feinstein’s late New York cabaret Feinstein’s. In a departure from the traditional cabaret world, Savalas began incorporating her own music into her live shows, drawing influences from the Weimar Republic era of German Cabaret and the Moulin Rouge. Her 2019 live album is called “The Ménage a Tour! Live from Las Vegas” is a showcase of music, songwriting, dance, comedy, and burlesque. Since her departure from traditional cabaret, Savalas tours with her solo act and with Postmodern Jukebox as a headlining artist and their first female emcee ever. They have performed at grand venues such as Radio City Music Hall, The Greek Theater, and the O2 Academy in London. 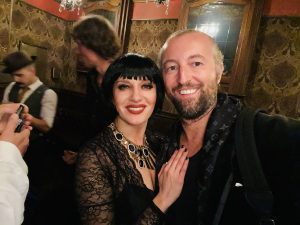 Residency Hamburg and Award. Ariana Savalas is headlining a grand show at Palazzo in Hamburg from November 2019 until March 2020. Upon her return she was nominated for the Golden Halo Award by The Southern California Motion Picture Council.

The Southern California Motion Picture Council was founded in 1936 when  Linda Burke established its non-profit status on May 1, 1936. Our very first event was held at the celebrated Hollywood Roosevelt Hotel when  Jean Harlow accepted the Golden Halo Award. Over 75 years later, we continue the grand tradition at the famed Sportsmen’s Lodge in Los Angeles