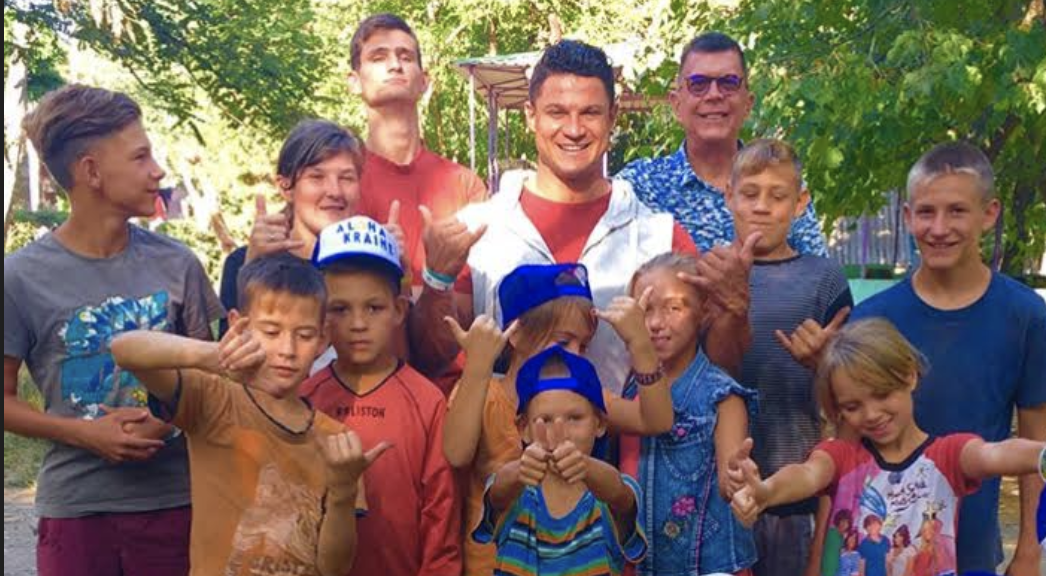 Michael-Vitally Vernon Helps Orphans In Ukraine, And Why We All Should Join Him!

An American top athlete and former Marine wants to bring clean water to the orphans of Ukraine that he left being adopted into his American home when he was 12 years old.

A US Marine helping orphans. Michael-Vitally Vernon has visited Ukraine 5 times in the past 6 years. All due to strong desire to empower and aide orphans. Vernon was an orphan himself in Ukraine at age 6-12. Then he was adopted to America. He has been blessed with an opportunity most will never have. His idea is smart. He pledges to create a support network of families and friends. He envisions to pave the way for a new generation of philanthropists. Helping through education, rather than just enabling short term support. His past trips included one and two week visits to summer camps with 250 orphans in south Ukraine where he and his colleagues provide a program to  orphans while there. This time he visited an orphanage near the nuclear energy plant Chernobyl.

Nuclear Site. Chernobyl is internationally known for its nuclear fallout. Up to a million people had to evacuate within the week followed the reactors meltdown. This was in 1986. Today, many still feel the effect of the disaster. Not only did it create a national disaster but thousands of people died with many more to have serous health effect in the decades therafter .

30 years radiation. According to BBC UK news, “Today it is still illegal to live inside the exclusion zone. Despite this, about 130 to 150 people do. Many are women, still farming their ancestral land in their 70s and 80s”. Despite this, tour business are cruising, showing the site to tourists a few hours at a time . The main radioactive fallout from Chernobyl came in the form of iodine-131 and caesium-137. And that has a half-life of 30 years before it decays.

No clean water. Prolisok Orphanage is located within 45 miles form Chernobyl nuclear fallout. The orphans urgently need clean water, and working showers . Michael and his small family of friends network  has donated everything they were able to, but that is not enough. A local fund is available too, for needed funds for construction of a fresh water well, and working showers. The Freeway Kiev local ministry Organization tries to help : https://give.woee.org/en/GeneralFundFreeway

Crypto Fund to help. 2019 there is even a way to support and donate via major crypto currency donations:

New University. Michael Vernon’s long-term  goal is to open a University in Kiev , Kharkiv and the Lviv oblast regions. He aims to provide quality education in Blockchain to empower the Ukrainian youth, by teaching them new technologies. Vernon adds: “Blockchain is a secure and decentralized ledger using cryptography on a consensus network. Open to anyone to see transaction hash but extremely secure.  Blockchain can be applied in any industry from Digital Rights to Democracy to Finance  using smart contracts. And can also do good, as the orphanage fundraiser shows.” Michael-Vitally Vernon graduated “Cum Laude” honors from Hawaii Pacific University In 2017. He earned a B.A. in Finance and Master of Business  Administration-Consulting. His instagram is Hawaiian_Aesthetics.