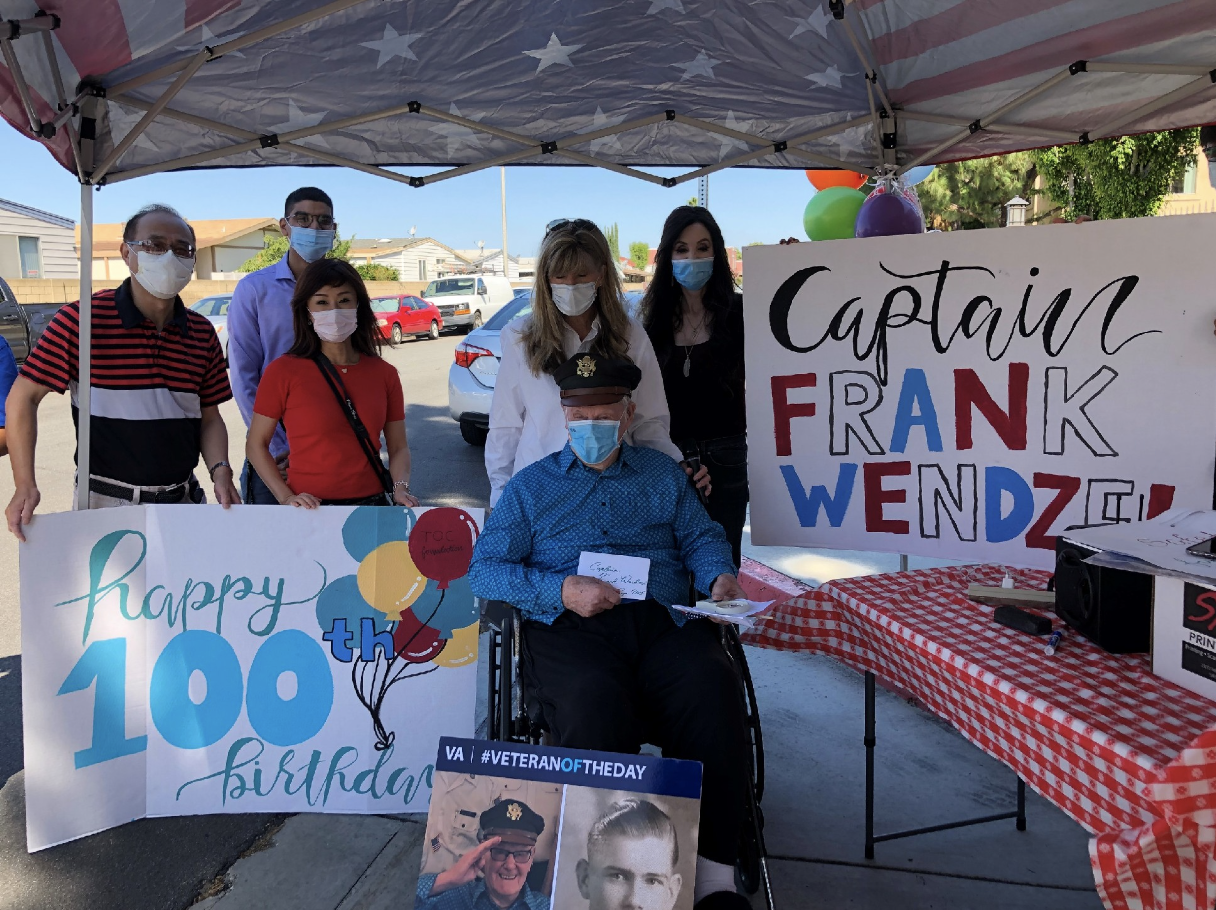 A special local event was held this morning at Freedom Village Health Care Center in El
Toro, California by a special family to celebrate the 100 th birthday and Legacy
of Captain Frank Wendzel.

Some 100 years ago in 1920 Frank was born in Kleenburn, Wyoming. He left Wyoming
to join the Army Air Corps in 1941. After the war, Frank settled in San Diego, California
and moved to Orange County in 1966 where he has lived ever since. He is one of
Orange County’s oldest living residents.
Captain Frank was a very happy man. His daughters and grandchildren were happy to
see Captain Frank enjoying his special day and all the people who came out were
smiling and glad to be out in the beautiful Orange County sun. It was a splendid day.
Frank and his family shared that it was a relief for the Captain to be out as he has been
in quarantine for over 90 days. With mask on and practicing social distancing, we all
stood and watched in awe as over 100 cars did a drive-by. We do not normally think of
a drive-by with such a positive thought but today it was a real tribute from people for this
veteran. People were hanging out the windows of the cars, waving flags, blowing
bubbles, and yelling “Happy Birthday Captain Frank. Thank you for your service.”
How does one describe Frank? Well, Frank is one of those Rare people who not only
has lived for a full century but has had a storied life serving his country, family, and his
fellow man, and has done so with great distinction. Frank was part of the very secret
Operation Crossroads that tested the Baker Atom Bomb Drop on July 25, 1946. Can
you imagine that at this time the military and scientists did not even know if the plane
would survive the test and explosion, or if the pilot and crew could survive radiation
exposure. With living 100 years, I guess we know the answer to that question. This
dedicated patriot after flying numerous B-17 missions over Europe, was selected to go
on this mission and essentially, he and his crew risked their lives without a second
thought. After the service, Frank was part of the space program and instrumental in
putting Americans in space working on the Atlas, Apollo and with Project Mercury 7
Astronauts. Frank worked at McDonnell Douglas for many years living in Huntington
Beach. One would think that enough for one man’s story, but Frank had a great love
story with his wife, Marguerite, raising two daughters, Susie and Sherry; a son, Stan,
who all came along in the sixties, and now has five grandchildren.
As we interviewed Frank with the aid of his daughters, Frank’s responses were just
direct, humble, simple, and down to earth. Frank has seen many changes in his 100
years in the OC. Most notable is how OC has grown from an Agri-ranch atmosphere
into a vibrant county of great diversity. I did not have to ask if Frank had Asian or
Chinese friends as there was people of every race, creed, and color; dignitaries, elected
officials, fellow seniors, veterans, friends, and family were present.
Getting up in age myself, I wanted to know the secret to Frank’s longevity. It was the
quickest response to my interview questions: Good Genes, Optimism, Education,
Family, Love, and Purpose. Oh, and a small glass of Frank’s favorite Heering Cherry
Liqueur.
Frank’s favorite sport is tennis. He watches the Tennis Channel every day. At one time
he was a ranked player. He has played with famed world-class tennis professional and
Grand Slam winner Rod Laver, and also in the sixties he played with Pancho Gonzales.

From the Asian News Desk, our newstodayworld.org staff and a grateful nation, who
thanks you for your service, Happy 100 th Birthday Captain Frank. May
God give you another 100!